The Cree (Nêhiyawak in the Cree language) are the most populous and widely distributed Indigenous people in Canada. Cree First Nations occupy territory in the subarctic region from Alberta to Québec, as well as portions of the Plains region in Alberta and Saskatchewan. However, the Cree are relative newcomers to the Plains being the last Indigenous group to move permanently onto the Plains starting in the 1790s. The Plains Cree emerged from the main body of Cree (Woodland Cree), who were subarctic boreal forest hunters in Saskatchewan and Manitoba. Because of their early relationship with the Hudson’s Bay Company starting in 1670, as well as their entrenchment in Montréal-based fur trade networks starting in 1731, the Cree became central figures in the Western North American fur trade. The Cree maintained almost exclusive access to manufactured European trade goods, such as firearms, iron knives and hatchets, coarse woollen cloth, wool blankets, cooking utensils, beads, and needles. Because of their prominent role in the fur trade, marriages or alliances between Cree women and fur traders became an essential component of fur trade negotiations, which resulted in many Métis people tracing their descent from Cree women and French-Canadian fur traders and voyageurs. Although the fur trade did shift some economic conditions and altered some of the everyday aspects of the Cree lifestyle, it did not fundamentally undermine or alter their culture, beliefs, and traditions.

After acquiring guns and iron weapons through trade, the Cree expanded their territory and seized control of much of the Hudson Bay Watershed, hampering access to European posts to all western Indigenous peoples apart from their allies, the Assiniboine (Nakoda Oyadebi). Armed with muskets and iron-tipped weapons, the Cree began a two-pronged western migration that brought them through the northern woodlands to the Rocky Mountains and in a southwesterly direction to the Great Plains. Although the Cree first occupied the Prairie parkland only seasonally, some Cree permanently exchanged their canoes for horses, and subsisted primarily on the buffalo hunt on a year-round basis. During this time, many Cree remained in the boreal forest and the tundra area to the north, where a stable culture persisted – these groups were the Swampy Cree and the Woodland Cree. They continued to rely on hunting moose, caribou, smaller game, geese, ducks and fish.

Rather than supplying furs and pelts to the expanding Hudson’s Bay Company and North West Company, the Plains Cree provisioned trading posts and fur brigades with Pemmican, which was made by pounding dried meat with berries and pouring melted fat over the mixture. It was a dense, high-protein and high-energy food that could be stored and shipped with ease to provision voyageurs in the fur trade travelling in the prairie regions where regular game could be scarce. As a result, prairie bison herds were recognized as a rich resource, whose dried and meat fat became a lucrative alternative to the trade in furs. The Plains Cree emerged from the Prairie parkland; however, they are considered a Plains tribe because of their economic dependence on the buffalo.

Control of buffalo and horse herds brought the Plains Cree into conflict with other Plains peoples, such as the Blackfoot, Gros Ventres, Shoshone, Ktunaxa, Lakota, and Métis. Over half the Plains Cree population was wiped out by smallpox and influenza in recurrent epidemics between 1781 and 1838. By 1871, because of epidemics and endemic warfare with the Blackfoot, only 7,000 Plains Cree remained. Disease epidemics, the destruction of the bison herds, and government policies aimed at forcing First Nations to surrender land through treaties, however, caused great stress for Plains Cree and other “horse-culture” people by the 1880s. Subsequently, the Canadian government, under the leadership of Sir John A. Macdonald, actively withheld rations and other resources to force starving Plains peoples into signing treaties and relocating to reserves. There, the Federal Government subjected the Cree to further cultural destruction through decades of trauma endured in the residential school system. Between 1884 and 1951 the Canadian government supressed and banned many Cree cultural ceremonies and rituals including the Thirst Dance, powwows, vision quests, feasts, pipe ceremonies, sweat lodges and more. Today, Saskatchewan has the largest approximate registered Cree population with 115,000. 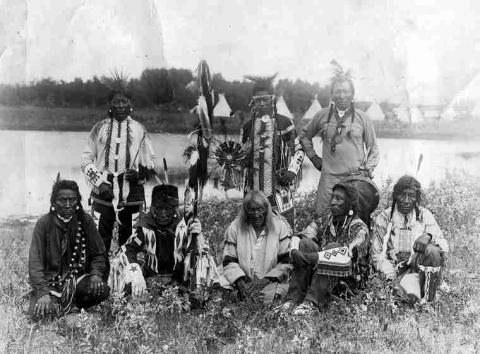 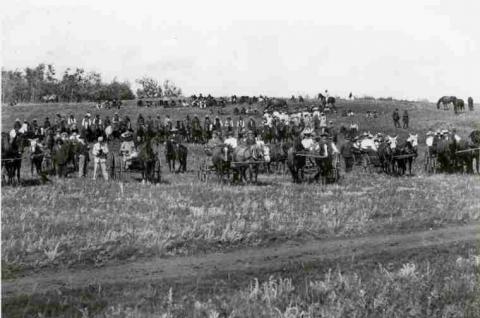